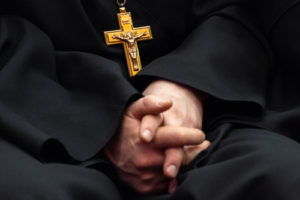 An additional 12 Catholic priests have been identified for sexual abuse of children, according to a report from CBS3 Philly. The names of the 12 priests were not previously included on the lists released by the by the Catholic Church.

The names of the 12 priests were released by an attorney who represents eight women and 22 men who claim they were victims of clergy sexual abuse at the hands of Catholic priests. The attorney noted that his clients have been offered compensation packages from the church’s sex abuse fund, but isn’t sure if the clients will accept the packages or file a lawsuit instead.

The Catholic Church in New Jersey did not issue any comments or a statement in response to the story from CBS3 Philly.

The co-founder of Road to Recovery, a victim counseling program, Robert Hoatson, a victim himself of clergy abuse, released the following statement:

“I didn’t turn my back on the Church. The Church turned its back on me and other victims. You never go back to the one that abused or the people that abused you. It’s not a safe place.”

The 12 names released by the attorney span all of the diocese in New Jersey as well as the Archdiocese of Newark. Hoatson noted that the abuse he suffered came at the hands of a priest who is now deceased. It is unknown how many of the 12 newly released priests are still alive. The ages of the victims right now range from 45 to 87 and the abuse took place between the years of 1946 and 1982.

Did you or a loved one sustain serious injuries due to clergy sexual abuse in New Jersey? Don’t let the medical bills pile up while you wait for the negligent party or their insurance company to do the right thing. Right now, you need an aggressive personal injury attorney on your side, fighting to get you the compensation you need, want, and deserve. The certified attorneys at Blume Forte Fried Zerres & Molinari represent clients injured because of clergy sexual abuse in Chatham, Jersey City, Sea Girt, North Bergen, and throughout New Jersey. Call 973-635-5400 or fill out our online contact form to schedule a free consultation about your case. We have an office conveniently located at One Main Street in Chatham, NJ 07928 as well as offices in Jersey City, Sea Girt, and North Bergen.