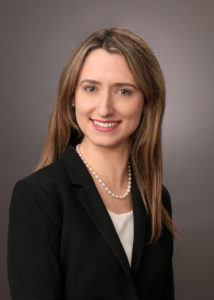 Ashley A. Smith joined the firm as an associate attorney in July 2018. Her practice is focused on all areas of personal injury litigation and medical malpractice.

Ashley is a graduate of Amherst College, having obtained degrees in English and psychology, and New York University School of Law. At NYU Law, Ashley served as an Executive Editor for the Journal of Legislation and Public Policy and participated in the school’s rigorous year-long Civil Rights Clinic, helping to represent individuals in a federal lawsuit arising out of their unlawful arrests and detention.

Prior to joining Blume Forte, Ashley worked for a firm in central New Jersey where she litigated numerous personal injury, medical malpractice, employment law, and class action matters, regularly appearing in courts all over the state. In addition to being regarded by her peers as a superb writer, Ashley is a skilled public speaker who has served as a coach for The Dale Carnegie Course in New York City. Ashley brings to the firm broad, in-depth knowledge and experience in civil litigation. Ashley is admitted to practice in the State of New Jersey, the U.S. District Court for the District of New Jersey, and the State of New York.